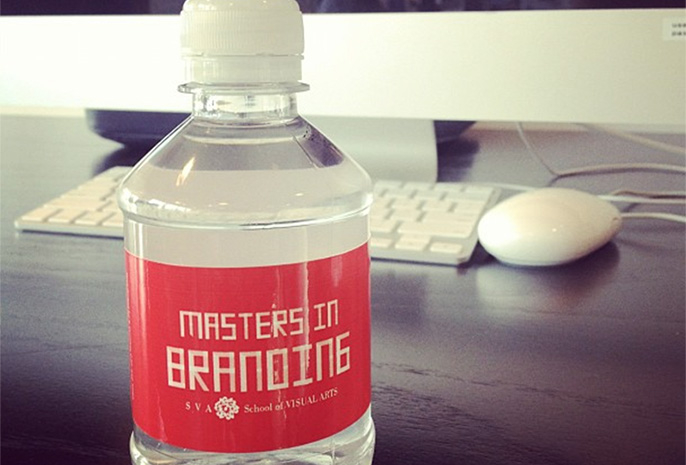 There comes a time in everyone’s career where you face feelings of inadequacy. It happens to the best of us. You may say “I wish I knew how to do this better” or “I could get that job if I had that degree.” I am a queen of self-deprecation when it comes to skills. It’s my safety blanket. To cope, I became an over-achiever, exhaustively pushing myself and others to not settle for status quo. My feelings of inadequacy and lust for being part of a critical learning zone led me to pursue a Masters.

The quest led me from one school to the next – but the practical well-rounded program of my dreams remained elusive. Until one regular day while researching current brand trends – I came across a tiny banner ad on Armin Vit’s Brand New blog. That’s when I learned about the Masters in Branding program at the School of Visual Arts in Manhattan.

Fate can be a funny thing…for me, it manifests as a chill down my spine. I had never heard about a branding program before let alone at SVA and led by my idols. Coincidentally I had just bought plane tickets to NYC for vacation only a few days prior. Even more coincidentally, the only open house for the program was taking place while I would in New York. I’m not the most spiritual person, but coincidences like this are hard to ignore.

Off to New York

Two months later, I’m in a room overlooking Manhattan with about 100 other hopefuls who frankly scare the crap out of me. These guys were fresh and much better at working a room than me. I was just the bike nerd from LA with a propensity for fonts. Totally intimidated. Especially when Debbie Millman came into the room, coffee cup in tow, ready to greet our smiling faces and introduce the program. Into the evening – one by one – professor and student spoke about the MPSB program…their passion and energy made the environment comfortable and familiar.
Upon wrapping 10 days in the big apple, I returned to LA and began to wrap my head around applying. Easier said than done…especially while simultaneously starting one of the busiest freelance periods of my design career.

Dusting off the Critical Writing Skills

The application process was straightforward but it had been 7 years since I had done anything resembling academic writing. I write how I speak – and I have a habit of assuming too much of my readers.

I had to re-learn how to structure paragraphs, edit to a particular length, and explain or site facts I presented. This is where a fabulous support team of graduate student friends comes in handy. My first few drafts came back covered in red markup. But greatness comes in the refining stage.

I wanted the reader to feel like they were right there with me, as a way of illustrating how close I am to my work. With cycling, you naturally push yourself to accomplish intense physical feats just to savor a few minutes at the top of a hill. Those moments are awe-inspiring and teach you how to press on no matter how it is. I knew grad school was going to be hard, so I wrote my personal statements as if the program was the hardest mountain I was about to climb.

Part Two of the application was to formally critique a current brand, identifying its market relevance, historical significance, and creative. I chose premier cycling component manufacturer Campagnolo. This was quite a challenge as I had to do this in 750 words, I had to let go of my imagery and get down to business.

Read my Statement of Purpose

The Last Steps are Always the Hardest

I had made it this far, and yet getting the package out the door was not going to be easy. I  like to make a good impression, so I decided to print my application materials on high-end paper. Designers, however, have a different standard for high end, for me, it was Cranes Lettra or nothing!

However, the sourcing, printing on, and final prep was a whole other bag of tricks. That task involved: 2 Kelly Papers, 2 FedEx/Kinkos, 20 Sheets of Cranes Lettra 24W, 1 USB drive, 1 Roadside Rescue from AAA, 3 Exacto blades, and several panic attacks.

One Kinkos refused to print on the fancy paper, then the USB drive with my app documents went AWOL, which while looking for led me to get locked out of my car. What should have taken an hour – took four. Thank you to the FedEx Office in Studio City, CA for being so positive and helpful.

I’ll be the first to tell you that you can’t get anywhere in life without relentless hard work. There is no skipping the line and the entitlement will only hold you back. We have raised a generation of interns, over-saturated the market, and I’m not sure we have entirely realized what the recession did to the current educational/career structure.

As I write this, on my 30th birthday, I have always worked towards being as well-rounded as I can get. I never thought the job market would be as difficult as it was, and countless rejections later I am a stronger person.

After turning in my application for SVA, I thought maybe I had a chance. On the surface I had the general requirements and history they said they were looking for – but was I good enough? Would my writing pass the test? For 7 weeks, life felt like a low-end VCR with a bad tape in it on pause. The screen was fuzzy, skipping, and life happened around me.

I snuggled my self-deprecation blanket in an effort to prepare for just another rejection. Friends were positive and believed in me, but I knew that if I wasn’t realistic about the odds, I was setting myself up for disaster.

Out of the blue in early April, I received an interview request email. It was only 10 days before the school said we would find out about our applications – by then I had figured it wasn’t going to happen for me. That email was shocking, exhilarating, and also made doing anything resembling work the rest of the day very difficult.

On Monday afternoon, I skyped with J’aime Cohen, the graduate advisor for the Masters in Branding program. Taking extra time beforehand to center my camera under the decorative tapestry hanging in my room.

I was expecting a somewhat in-depth interview where I would have to site specific things from my application, however, the questions were more informational instead of theoretical. She asked me how I found out about the MPSB program and where I wanted to take it if I were accepted.

I can’t imagine what its like to interview person after person and keep everything straight. My talk with J’aime was short – and afterward, I honestly felt less confident about my chances. However there is fate, and if it was meant to be then it would be.

Sitting in my cubicle after lunch trying to focus on some in-house tradeshow graphics,  I heard the email ding on my phone – the notification title just said “Important Communications from SVA”

Imagine that moment, wide-eyed, fumbling around with a food coma, trying to switch gears as I thumb through to my email as rapidly as I could.

The last time I got some amazing news after an exhausting effort, I lost my cool, complete with tears and incoherent hollers. This time was different. I calmly stood up, walked to my coworkers’ office and sat down quietly.

I was about to embark on an extreme life-changing journey, risk everything, and let fate decide my future. There are a lot of people who helped me get where I am today and look forward to being there for them as they have for me.

Keep Calm and Ride On

So now, I’m moving to NYC. I’m leaving my wonderful life in Los Angeles to gamble with the big guys. I have no idea what lies ahead. I’m terrified and excited. I’m sad that I’ll be leaving behind an amazing group of supportive friends…and hungry to find out who my fellow classmates are going to be. The opportunity to study under the likes of Debbie Millman, Dan Formosa & Ken Carbone…is surreal.

After NYC, I can only hope to work for a branding firm that believes in design as much as I do, one that trusts their team as much as their work.